Jack Druffel earned his bachelor's degree in music composition at Illinois Wesleyan University in 2019. Under the guidance of David Vayo, Jack dived deep into a formal music training and the exploration of musical textures and combinations of acoustic and electronic sounds. During his time at Wesleyan, he was the 2019 award winner of The Hope Ellen Pape President's Club Award, and one of the winners of the 2019 Illinois Wesleyan Symphony Orchestra Composition Competition. He was also a featured soloist with the Illinois Wesleyan Wind Ensemble as the winner of the concerto competition in early 2017. Later that year, Jack studied in Milan, Italy, with Michele Tadini at the Milan Conservatory, engaging in music technology, and boarding his cultural horizons. Currently, he is pursuing his MFA degree at Columbia College Chicago in the Music Composition for the Screen program.
Composing for a variety of collaborations with directors and composers both in film and theater, Jack has collaborated on many film and theater projects. He is currently working on a feature-length documentary, an animation short, and a short about growing up. In his music, Jack loves to push the boundaries of what music can do. Often exploring the combination of electronic and acoustic sounds, creating unique sonic worlds that have been described as eclectic, imaginative, cerebral, and vividly evocative of moods.

"I have many favorite concerts, but one of the most memorable was getting to hear Verdi's Requiem at the Musikverein in Vienna.  I was at the very back of the hall and could feel the bass drum pounding through my chest." 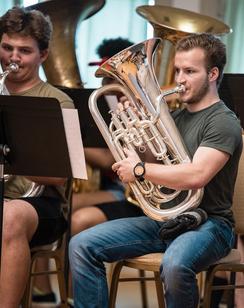