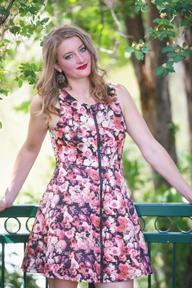 Julia Rahm has studied and performed repertoire from jazz to folk, and musical theater to opera. She received her Bachelor of Arts in Theatre, Music and French from Sarah Lawrence College in 2014, and graduated with her Master of Music in Voice Performance from the Chicago College of Performing Arts in 2019. Her biggest reason for teaching is to help students uncover and unleash their own unique blazing fire of talent, expression, depth, charisma and creativity. She believes that music has the power to transform lives and is committed to working with each student not just on the technique and the practicing, but also on the inner challenges of cultivating confidence, trust and authenticity in one’s own singing or playing. She is also currently developing vocal workshops, Collective Voice Healing, which bring people together in groups to experience their own voice as a mindfulness practice. Using collective improvisations, the group is led to release distracting thoughts and become more grounded in our own essential being. One of her most thrilling musical experiences was playing synth and singing harmonies for the French pop/variety band, Benjamin Swax in Paris, France. Website: juliarahm.com.

"If I could play any other musical instrument, I would love to learn the Indian sarangi! Its sound is so soulful, full of longing and mystery, it just transports me to another world."