Zachary Green has been a dedicated musician since 1998. Having grown up in Illinois' District 300. Zach has had the fortunate experience to work with Mark Bettcher, who along with a few others built the music program at Dundee-Crown High School from the ground up. Starting the viola in his sophomore year, he was able to make it to ILMEA state for both sophomore and senior years. After graduating, he took a gap year to study at the Northwestern Music Academy, at Northwestern University, with Stacia Spencer. With her help and instruction, Zach was able to successfully audition to the Chicago College of Performing Arts at Roosevelt University. Zach studied at the CCPA for two and a half years, with his primary instructor Lawrence Neuman of the Chicago Symphony Orchestra. Here he studied viola performance and chamber music. Along with Mr. Neuman, Zach's chamber coaches have included Deborah Sobol, Shmuel Ashkenasi, and Li-Kuo Chang. After two years with the CCPA, Zach was invited for a summer to study at the Cassalmaggiore music festival with Roger Chase, in northern Italy.

After leaving the CCPA, Zach went on to study viola performance with Anthony DeVroye of the Avalon String Quartet at Northern Illinois University. At NIU, he continued to study chamber music as well with the help of chamber coaches such as, Mathias Tacke, Blaise Magniere and Marie Wang. During his time at NIU he also performed in the Baroque Ensemble with Dr. Janet Hathaway. Additionally he served as both section violist and vice principal violist with the LaSalle-Peru Symphony Orchestra, in LaSalle-Peru Illinois. Zach also had the chance to study with the wonderful teacher and violinist, Ann Montzka-Smelser for Suzuki certification from  Every Child Can to Book 6.

Graduating from NIU in 2014, Zach then continued his education in the field of luthiery and repairs. Acquiring a job at a small, local shop, he was given a chance to learn repairs with Yuri Saenz. During his years working in repairs he went for formal training and studied with Hans Jurgen Nebel, a prodigy in repairs and a former pupil of Simon Sacconi at the Wurlitzer Foundation in New York.

Currently, Zach is pursuing full-time teaching for Violin and Viola of all ages and skill levels. In addition to teaching violin and viola technique, he is helping students understand instrument repair and maintenance so that future string musicians are more able to be self-sufficient and to navigate a sometimes dubious world of repair.

What music teacher inspired you most?

"In my experience as a student, I have had many great instructors and a few not so good instructors.  While this choice is very difficult,  I say that Mr. Roger Chase has been the most inspiring to me.  He's the kind of person who doesn't just want to teach you how to play,  but he wanted to impart lessons on life too. He would always have something to say that would make you think and usually something that would alter the way you look at life, for the better.  He is a direct link to -in my opinion- the greatest era of musicians.  He was taught by Lionel Tertis and is now the owner of Tertis' legendary viola,  the 1717 Montagnana. He always seemed to be percolating ; thinking of something profound no doubt.  Aside from this,  his approach to viola playing opened my little brain. Seriously. Prior to him I didn't think there was a separate technique,  apart from violin technique.  No, he accumulated knowledge from many,  many sources and though he never claimed to have talent;  he does believe in hard work and keeping a curious mind.  I'll never forget the conversation he and Mr. Li-Kuo Chang had together, in one of our studio classes, about their favorite recording of the Bach Sonatas and Partitas for violin.  They both agreed that Arthur Grumiaux had the cleanest interpretation and clearest playing.  Immediately after class let out,  I went to the music store and bought that CD and listened to the whole thing that night.  I still use it as a reference to this day.  I often reflect on his words. He gave me direction and courage. Because of Mr. Chase, I'll never stop learning. He showed me how to be my own musician and there will never be a day that I won't be grateful to him for the time and guidance he gave to me." 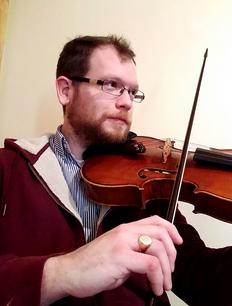